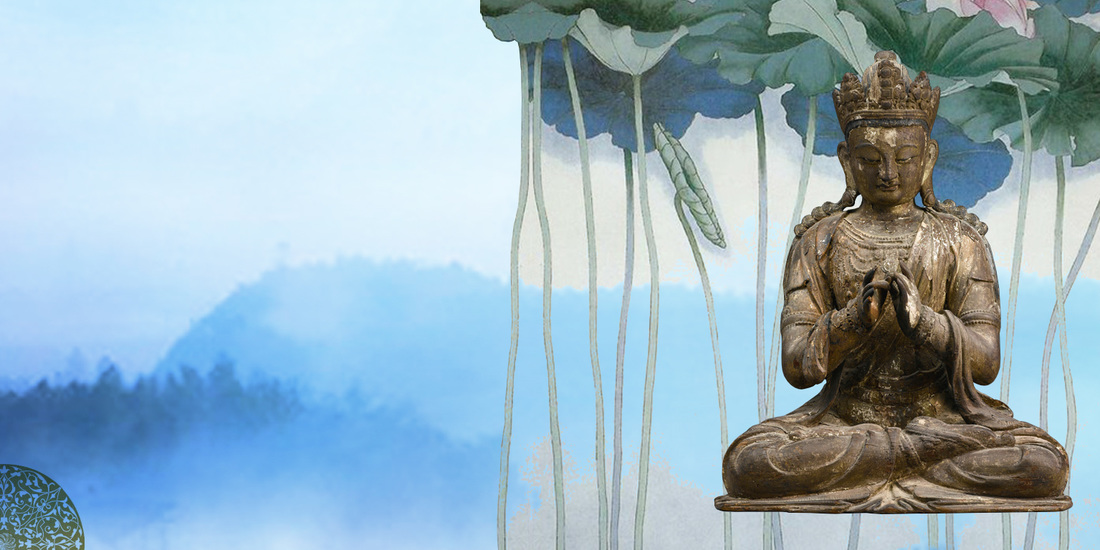 Vairochana Buddha （Sanskrit：वैरोचन，Vairochana，or Maha-vairochana）, Vairochana means “to shine,” that is, to brilliantly illuminate everywhere. He is the Buddha of the center, one of the Buddhas of the Five Directions. The color of his body is white. He sits atop a lotus flower on the dais of Eight Great Lion Thrones in the center. He can eradicate the poison of delusion from living beings and turn the adana (“maintaining”) consciousness into the Wisdom of the Essential Nature of the Dharma Realm. He belongs to the Central Buddha Division among Shurangama Mantra’s five divisions.

Master Siksananda during the Tang Dynasty adapted this translation in his eighty-fascicle Avatamsaka Sutra. In Fascicle 12, “Titles of the Tathagata” Chapter from the eighty-fascicle Avatamsaka Sutra, there is a part that goes, “All of you disciples of the Buddha, the Tathagatas in this world are named ‘Accomplished in All Meanings,’ ‘Perfect Moon,’ ‘Lion's Roar,’ ‘Shakyamuni,’ ‘The Seventh Immortal,’ ‘Vairochana,’ ‘Gautama,’ ‘The Great Shramana,’ ‘The Supreme,’ ‘Guiding Master,’ and so on. Their names number in the tens of thousands, causing living beings to have different understandings.

On the other hand, Master Buddhabhadra from the Eastern Jin Dynasty translated the Sanskrit Vairochana into Lu she nuo (Rocana) in Chinese, in his sixty-fascicle translation of the Avatamsaka Sutra.

In the Central Buddha-division is Vairochana, the Honored One.
The Tathagata’s lineage transforms the multitudes.
Universally cultivate the ten thousand conducts and the paramitas.
There is no self in all dharmas:  certify to perfect penetration.

DWO TWO CHYE DWO JYU LA YE translates as “Thus Come One.”  It refers to the Buddha Division.  To review,  there are five divisions in the mantra – one for each of the five directions. In the middle is the Buddha Division with Vairochana Buddha as the teaching host.  This gives rise to the other four divisions.  Of those four divisions, in the west is the Lotus Division which takes Amitabha Buddha as the teaching host.  In the east is the Vajra Division which takes Akshobhya Buddha as the teaching hosting, that is Medicine Master Buddha who Dispels Calamities and Lengthens Life.  In the north is the Karma Division with Accomplishment Buddha as the teaching host.  In the south is the Production of Jewels Division with the Buddha Production of Jewels as the teaching host.  These five divisions exist in this world to look after the five great troops of demons.  The Five Divisions of Demons are located in the five directions as well.  These Five Buddhas keep they under control so they have to be obedient.  But although they must obey, their hope is to gradually destroy this world.  That’s why at different times in the world there are different kinds of calamities that occur.  These calamities are caused by heavenly demons and those of outside ways.  What they fear most is that the whole universe won’t disintegrate.  What concerns them the most is that this world is not going bad fast enough.
​
In other words, they want to destroy the world as quickly as possible.  But the Buddhas of Five Directions are suppressing them, so the demons must work surreptitiously.  They destroy the world little by little, but they don’t dare to do it out in the open.  So in the Shurangama Mantra these five divisions will gradually be explained.  They will be spoken about clearly.  The demons are pitted against the Buddhas.  For instance, the Buddha teaches and transforms living beings so they quickly accomplish the Buddha path.  The demons also teach and transform living beings but it is because they want them quickly attain demonic paths.  They work in direct opposition.  But the Buddha was brought to accomplishment through the help of demons, so demons are truly Good Knowing Advisors for Buddhist disciples.  If you can accept graciously things that are not in accord with your wishes, then you will come to know the advantages gained by enduring such opposition.  You can regard demons as your good advisors.  In cultivating, we should learn to be reverent to the Buddhas and also to not be in opposition to the demons.  Then friend and foe are viewed as the same.  Buddhas and demons are one and the same.  If you are able to look at them like that, without hating them or loving them, without seeing good or evil, then you’ve more or less made it.

JYU LA YE refers to the lineage of the thus Come One.  The lineage of the Thus Come One is the faithful disciples of the Buddha.  In the Central Buddhha-division is Vairochana, the Honored One.   The center belongs to the earth which can produce the myriad things.  So we see that the Buddhas also accord with the five elements.  The center, the Buddha Division, relates to the element earth.  The earth can give rise to the myriad things; the earth returns to the four seasons.  Spring belongs to the element wood, summer to the element fire, autumn to the element metal, and winter to the element water.  There are only four seaons in the year, but there are five elements.  How do they fit together?  The earth belongs to the center; the center to the earth.  The earth returns to the four seasons.  Then center is wu chi (戊己) earth, the east is chia yi (甲乙) wood, the south is bing ting (丙丁) fire, the west is keng hsin (庚辛) metal, and the north is jen kuei (壬癸) water.  The center, the Buddha Division, is the Venerable Vairochana Buddha.  Vairochana is a Sanskrit word which translates as “Pervading All Places,” and refers to the pure Dharmabody of the Buddha.

The Tathagata’s lineage transforms the multitudes.  The center represents the Buddha Division, the lineage from which the Buddha teaches and transform all living beings.  Universally cultivate the ten thousand conducts and the paramitas.