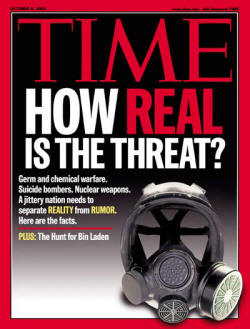 In the fall of 1984, members of the Rajneeshee, a Buddhist cult devoted to beauty, love and guiltless sex, brewed a "salsa" of salmonella and sprinkled it on fruits and veggies in the salad bar at Shakey's Pizza in The Dalles, Ore. They put it in blue-cheese dressing, table-top coffee creamers and potato salads at 10 local restaurants and a supermarket. They poured it into a glass of water and handed it to a judge. They fed it to the district attorney, the doctor, the dentist. Their plan: to seize control of the county government by packing polling booths with imported homeless people while making local residents too sick to vote.

It was the first large-scale bioterrorism attack on American soil, but it didn't get much attention at the time. Nobody died--although at least 751 people got very sick. There was no Fox News or MSNBC to report every case of gastroenteritis. And the federal officials called in to investigate held off publishing a study of the incident for fear of encouraging copycats.

Now the Rajneeshee attack is back in the news, thanks to Germs: Biological Weapons and America's Secret War, a new best seller that--by a stroke of publishing fortune--landed in bookstores the day the World Trade Center was destroyed. Its three authors, journalists at the New York Times--Middle East reporter Judith Miller, science writer William Broad and investigations editor Stephen Engelberg--were prebooked on the TV publicity circuit. Over the past few weeks, they have been everywhere, retailing their horror stories of Soviet germ weapons programs, Iraqi anthrax stockpiles, Japanese nerve-gas attacks and an American biowarfare defense program in denial and disarray.

How dire is the situation? The book is of two--or perhaps three--minds about it. Large sections are meticulously reported, offering eyewitness descriptions of four-story Soviet anthrax-fermenting tanks and behind-the-scenes accounts of the Pentagon's scramble to make enough vaccine to protect half a million Gulf War troops from an Iraqi germ attack (it fell 350,000 doses short). Other sections repeat uncritically the most alarmist anecdotes--such as the assertion, lifted from an obscure 1988 book, that the U.S. secretly sprayed American cities with mild germs to investigate the likely impact of deadly pathogens.

Germs is peppered with internal contradictions. Does a 5-lb. bag of anthrax contain enough spores to kill thousands or, as the book also claims, every man, woman and child on the planet? (The first estimate is much closer to the mark.)

No hype was necessary; the verifiable facts are chilling enough--and, in places, eerily prescient. Take the 1995 closed-door briefing for President Clinton and 400 officials from the U.S., Canada, Britain and Japan by Bill Patrick, former chief of the Army's bioweapons-development program. Patrick described how terrorists--armed with blenders, cheesecloth, garden sprayers and starter bugs mail-ordered from a U.S. germ bank--could spray enough deadly bacteria in the air intakes of the World Trade Center to infect 25,000 people. If that didn't scare anybody then, it will now.