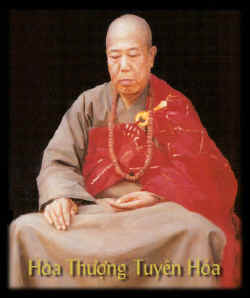 Repay the Master’s Kindness by cultivating according to Dharma

I will never forget my trip in 1984with the Venerable Master to Gold Wheel Monastery, which was then located on . That summer, the temperature soared up to 100 degrees. He was riding in an old beat up car without air conditioning. It was so hot that his robes were soaking wet. However, there was not the slightest complaint from the Venerable Master, who remained peaceful and at ease. When we had to pump gas on the way, he didn’t rush into the gas station to buy a cold drink to quench his thirst, either. He got out of the car and walked towards a fence in the direction of a slaughterhouse. He stood there in silence for a long time. The Venerable Master used every second to cross over these pitiful living beings so that they could leave suffering and attain bliss.

In the 80s, I often had opportunities to ride with the Venerable Master. As a vigorous cultivator, he was constantly reciting something when traveling back and forth in the car. Sometimes, all of the sudden, he would put his palms together very respectfully. In every moment of time, he was cultivating to liberate beings and set a good example for others. On long journey, the Venerable Master sometimes liked to chant “The Song of Enlightenment” for us. He had an amazing memory and there was not a Sutra he could not recite from memory. We asked why his memory was so powerful. He replied,” It’s because I don’t give rise to false thoughts and I have no impurity within me.” One time, we were on the road. I thought that the scenery was very beautiful and I asked Venerable Master to take a look. He said, “My eyes don’t look outside.” This was to teach us not to seek and look outside of ourselves.

In bringing Buddhism to the West, the Venerable Master encountered many difficulties when he built monasteries. He traveled back and forth to various places even at night. At that time, the last 30 minute drive to CTTB was on a narrow and winy muddy road and sometimes he would have to take a round trip between CTTB and within a day. The Venerable Master spared neither blood nor sweat, never pausing to rest. He worked like this every day and every year and never grew weary. Regardless of how tired he was or how difficult the situation might have been, we never saw the Venerable Master enjoy personal pleasures. His only wish was to take on the suffering of all living beings. In the 90s and even when he was seriously ill, someone offered him a “Lazyboy” so that he could rest and recuperate. However, that “Lazyboy” was never moved into his bedroom in ITI (a branch at ). It is just like as the Venerable Master said, “I don’t have the slightest bit of selfishness, not even as small as the hair.” He never pursued personal comfort or convenience. He always said that he had no virtuous qualities and that he dared not to enjoy blessings. Because when the blessings are exhausted, hardship will arrive. Shr-Fu always reminded us to cherish our resources and energy because they are hard to obtain.

Before it is dark, there is no need to turn on the lights everywhere. When a person leaves their bedroom, they should not forget to turn off the lights. Through cause and effect, if one wastes the resources of the permanently dwelling, one must repay the debt. Everybody knew the Venerable Master would save napkins for a long time until the napkins couldn’t be used anymore. One time, the Venerable Master, in order to save electricity where he lived, did not turn on the stair light at night and fell. My intention of telling this incident is not to teach people to not turn on the lights and trip in the darkness; but to remember the Venerable Master’s frugality. Through his tolerance for difficulties and toil, we have such wonderful Way Places today.

No matter how hard the situation was, he worked for Buddhism and was extremely busy everyday. Although he was so busy, he never asked lay people to casually drive him here and there or ask people to buy this and that. Moreover, he never asked for any donations. He was an extremely indomitable man. The principles he established are “freezing to death, we do not scheme. Starving to death, we do not beg. Dying of poverty, we ask for nothing.” This includes not asking people to drive for him or buy things for him. Why? He was not selfish and did not pursue personal advantage: he was totally selfless.

The four deportments of walking, sitting, standing and reclining, one must have deportments can be cultivated and applied at every moment so that the time is not passed in vain. We should not fool around, laugh casually or indulge in idle chatter. If we talk from dawn to dusk, we have no respect toward the Dharma. Shr Fu taught us to have a subtle smile. (If a female would casually laugh, Shr Fu would roar in front of the assembly and ask, “What are you laughing at? A bhikshuni, losing her deportment because of laughing, had to kneel in the assembly for hours. Under such strict teaching of Shr Fu, none of us dared to talk casually at the monastery.) Talking too much is a huge obstacle for cultivation since loving to talk and laugh are connected to desire. Therefore, cultivators should neither cry nor laugh so as not to be moved by emotional desire. The Venerable Master often said, “without a set square and compass, one cannot make squares and circles.” The cultivators from the past until the present have strictly disciplined themselves in order to have some achievement.

Shr Fu maintained was neither too close nor too distant to his disciples– just the . If a disciple was too distant from Shr Fu, he would gather them in and remind that person to return to enlightenment and leave confusion. To the Venerable Master, the four-fold disciples were all equally important, and he treated monastic disciples and lay supporters the same without discriminating as so their ethnicity or wealth. He cared equally for everyone. There was nothing he could not give you: whatever others didn’t want, he would take. If you wanted something, he would give it to you without any hesitation. The Venerable Master often said to us, “As a cultivator, don’t think about how to make more money everyday; don’t think of ways to cook delicious food, making too many varieties makes people confused. If we behave so, what difference is there between us and common people? If we behave like this, our six sense faculties can not be purified. If one wishes to cultivate, one must apply effort to subdue the six sense faculties (eyes, ears, nose, tongue, body and mind) and the six perceived objects (forms, sounds, smells, tastes, objects of touch and dharmas). If we are greatly for delicacies, we are turned by our tongue and tastes. If without flavorful food, we can’t eat--how can we cultivate? Isn’t this the same as cooking sand and wishing it to become rice?”

The Venerable Master didn’t eat salt or oil on his food. In the early days, many people admired the Venerable Master’s cultivation and they followed him and ate food without salt and oil. Sometimes, people would cook special food or arrange it in a fancy way to make an offering to Shr Fu. Knowing this, he would not eat anything that day. Shr Fu skipped lunch sometimes; it was to make transference to the world. Sometimes, it was because his disciples didn’t listen and follow the teachings, and he would blame himself for not being able to teach his disciples well. He would skip lunch because his disciples were quarreling and no one would know the reason why.  Then after ten years, people would suddenly understand why the Venerable Master did not eat for a particular day. People remembered that it was because the kitchen staff had been arguing about different ways to prepare the food. Although the Venerable Master was not in the kitchen when incidents like this happened, he knew everything that was going on.

The floor of old Gold Mountain Monastery located on , was made out of cement. Regardless of how many offerings we had, the Venerable Master never bought a carpet. The dining hall had two functions: for eating and for Dharma lectures. After the Dharma talk, the Venerable Master would sit on the only sofa which was well worn and somewhat shabby. After we purchased ITI, I happened to see a sofa with a deeply sunken cushion. I thought, “Who would offer such a broken thing to us?” Then slowly, I remembered. That sofa was the one Venerable Master had used and sat in for more than 10 years when we were still at at . A sigh from my heart!

There was a long period when the Venerable Master did not use donations to buy food. We picked up the vegetables people discarded at markets. After sorting them, we kept the good and cooked them. On ordinary days, we would have either one or two dishes with one soup. We had plain and simple food. Although we had no delicious and fancy food, lunch still tasted wonderful. Shr Fu set himself as an example to teach us that we should carefully use the money donated to the temple and not make a mistake in cause and effect.

At that time, Venerable Master would lecture three times a week. On the weekend, he would go to CTTB for classes. Without fearing any toil, he traveled to various places in order to teach living beings. Every one of us focused on learning the Buddhadharma and we were filled with Dharma joy. We felt full inside and as a result, we naturally didn’t exploit things outside. Everywhere inside Gold Mountain Monastery on was totally quiet. Regarding birthdays, the Venerable Master said it was the day our mothers suffered and we should not celebrate them. We should recite the Earth Store Sutra and dedicate the merit to our mothers. We should not become more muddled after learning the Buddhadharma. This would be like the blind leading the blind, they would eventually walk on the wrong path and ruin the traditions of the Way Place. Cultivators must go against the stream and not flow with the current. We must be like a strong candle in a gusty wind.

The monasteries that the Venerable Master established are pure and not places for people to socialize. He wished to make living Buddhas instead of PR men. The Venerable Master always taught living beings with kindness and compassion along with straight talks that pointed directly to your mind. If you didn’t like to hear what he said, he still had to say it. He wasn’t scolding people. When one is successful in his/her cultivation, he/she would understand.

In the past, I had talked with Venerable Master on innumerable telephones, each time, he spoke the same matter – the tradition he establish by twenty-years of hard work, sparing no blood and sweat, would almost be blown away in a few minutes by his disciples. At that time, his heart was in deep pain. It made a very profound impression on me. I hope that we will not blow away the traditions and rules he worked so hard to establish in a few seconds. In order for the proper Dharma to abide in the world, we must reply on everyone’s cultivation and follow the teachings of Dharma. This is everyone’s responsibility and obligation. Shr Fu, I feel you are so great!