Poem in Praise of the Sangha 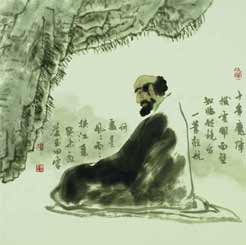 The offerings made to the monasteries everywhere pile up as high as a mountain,

So monks with almsbowls can receive food as they please;

Gold and jade in fact are not the most precious of items,

The kasaya (monk’s precept robe) alone is the rarest garment one can wear.

I, the Emperor, am Lord of China, with its mountains and rivers,

I worry over the nation, I‘m concerned for the people, I‘m always distressed.

Half a day spent living as a Sanghan.

We come to this life confused, we leave it deluded,

Between birth and death, I‘ve come to this world as a human in vain.

Before I was born, who was I? At the time of my birth, who was I then?

If after growing to adulthood, my identity was finally set,

Then when I shut both eyes at death, who have I become?

Coming to life cannot compare to “no further coming or going,” (Nirvana)

Because regardless of who we are, we are happy at birth and sad at death;

Happiness and sadness, meeting and departing, cause such trouble and grief.

Who knows which day will we attain true purity?

Yet if I could understand the important matter of birth and death,

and even today ‘turn my head around,’ it would not be too late.

It‘s hard to compare anything in the world to the ‘left-home’ life,

With its care-free, worry-free, peace of mind.

Your mouth savors the pure flavor of serenity,

Your body is forever robed in the ‘hundred-patches cloak.’

You are received as a honored guest everywhere you wander

Within the and the ;

All because in past lives you made the Bodhi Resolve.

We must refrain from exercising our cleverness;

Worldly affairs done over a century last no longer than a fleeting dream at dawn.

The war over territory turns the earth into a game of chess.

Yu the Great set up the ; but his descendant King Jye was expelled by King Tang;

Qin Shr Huang swallowed the Six Nations but soon the Han overthrew him;

From ages past all the great heros who have taken the world‘s center stage,

All now lie in the wilderness, beneath the dust and mud.

Can I exchange this yellow robe for a purple precept sash?

I got the robe because I had one confused thought in the past;

I used to be a monk who sought rebirth in the :

How did I wind up born into a royal clan?

For eighteen years as ruler I have not known a day of freedom:

Brigands in the South, rebels in the North, with no end in sight.

I‘m now putting down everything and heading for the .

I don‘t care who succeeds me as Emperor:

Let the future glory of the country take care of itself. 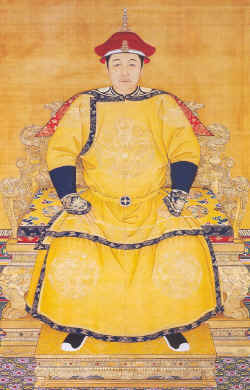