Both Hinduism and Buddhism are quite precise about the kinds of powers or "superknowledges" that a successful practitioner of meditation can expect. Among them are knowledge of one's previous lives, and the abilities to traverse great distances in a moment and to penetrate the minds of others. But Buddhist sages, in particular, are wary of displaying these powers to others, lest it bolster the ego they are trying to overcome. Venerable Master Hsuan Hua, a Chinese Buddhist monk, established a Chan monastery in San Francisco in 1970. In Asia, it is reported that he could heal the ailments of those willing to follow the dharma of the Buddha. But in the United States, where he died in 1995, Master Hua thought that using supernatural powers as a teaching tool would be counterproductive in a rational, scientific society.

Outside of Asian cultures, however, few believers encounter living saints--or their miracles. Indeed, in all the world's religions the most common miracles are those connected with prayers offered anonymously at shrines. The "modern" shrine tradition may well have begun 2,500 years ago, when the bones of the deceased Buddha were distributed as relics to tribal chieftains. Later they were collected and enshrined in stupas across northern India. Today India is home to innumerable shrines to assorted Hindu gods and goddesses who are also implored for miracles. In some Islamic countries, as in Catholic regions of Europe, pilgrimages to shrines remain a popular form of piety. But only relatively recently have efforts been made to validate reported miracles.

The Marian shrine at Lourdes in France--where the first miraculous cure was accepted in 1858--has had only 66 of 6,000 healing claims authenticated by the shrine's medical boards. The last was in 1987. In Iran, the Jamkaran mosque outside the holy city of Qom has been a point of pilgrimage for a thousand years. But only in 1998 did mosque officials begin investigating reported cures through its Registry of Divine Acts of Mercy. So far, officials have validated six miracles out of 270 claims.

Miracles will always withhold their meaning from doubters and the merely credulous alike. In any case, miracles alone are never a substitute for faith. But as the United States becomes home to all the world's religions, miracle stories have acquired a new and almost civic dimension. While they show that religions provide very different visions of how the transcendent operates in the world, those differences need not divide us: miracle stories also invite spiritual seekers to journey into worlds other than their own. As Gandhi understood, religion is itself an "experiment with truth." But miracle stories can be interpreted only by communities of understanding and memory--that is, traditions. As an old Hasidic saying puts it, "He who believes all these tales is a fool, but anyone who cannot believe them is a heretic." For believer and skeptic alike, that is the paradox inherent in any religious faith. 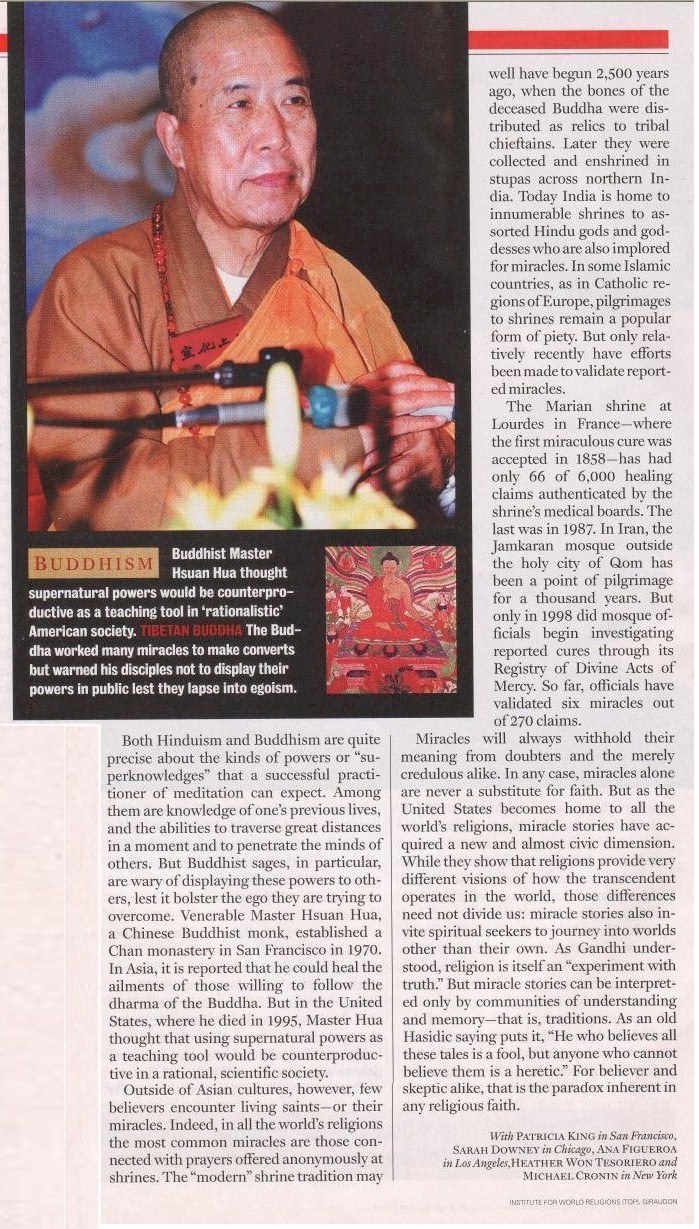