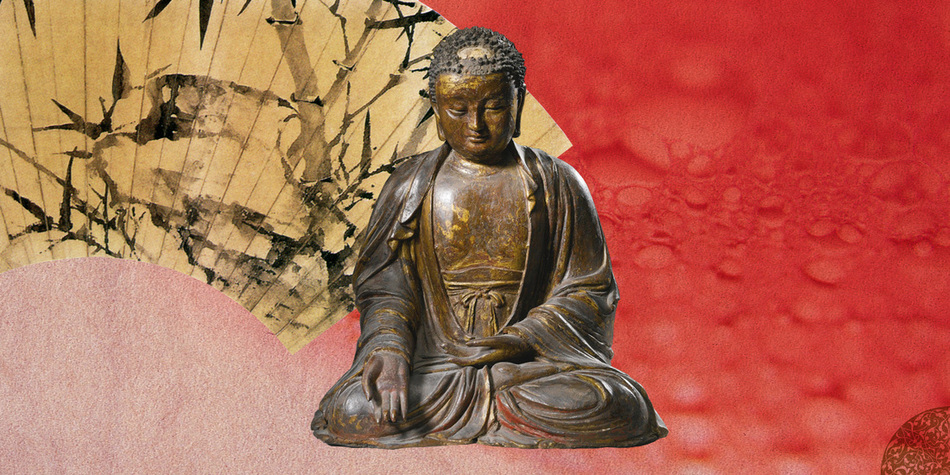 The Buddha jeweled Birth, is Lord of the Mani Division,
Replete with his retinue of Space-Bodhisattvas.
The south is the region titled Ping-Ting-Huo.
Its fire blazes with red light, illumining K’an and Li.

MWO NI is the mani jewel.  This is the south, the Jeweled Birth Division, the region hosted by the Buddha jeweled Birth.  The Buddha Jeweled Birth, is Lord of the Mani Division/ “Mani,” again, just means “jewel.”  Replete with his retinue of Space-Bodhisattvas/ He is surrounded by his retinue of Space-Treasury Bodhisattvas and Paramita Bodhisattvas.  The south is the region titled Ping-Ting-Huo/ The Chinese refer to this position in the south as ping-ting-huo, which belongs to the element fire. Its fire blazes with red light, illumining K’an and Li/ Although it is in the south, its fire blazes with such intensity that it illumines k’an, the primary trigram in the north, as well as li, the primary trigram in the south.  From the south, it shines to the north.  K’an(坎), in the north, is water.  Li(離) in the south, is fire.  The illumination goes from south to north and back again.  So we see that the light from the Jeweled Birth Division shines throughout the Dharma Realm.