Millions of People with One Mind 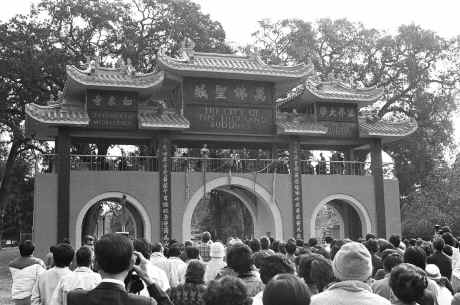 However, within the City of Ten Thousand Buddhas, everyone is cultivating the Way together, cultivating the principles of "No killing, no stealing, no committing of sexual misconduct, no lying, and no drinking of alcohol." At the minimum, everyone must abide by these five precepts, then we can transform and win over all people of the world. Once you get here and see things clearly and are willing to live here, then we welcome you; however, our lives here are very hard and harsh. In fact, the life here is so difficult and austere that we are like the living dead, like those people who are living in the graves - but precisely because of this reason, our place is the safest and most peaceful. 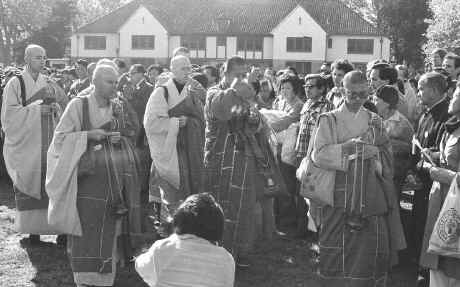 CTTB Is the Safest and Most Peaceful Place

In the past in 1968, people predicted that there would be a great earthquake in San Francisco, so all the wealthy people ran away and moved out of the city. At the time, it was January 1, and I told a person named Angel and about 30 other people, "It isn't that there won't be an earthquake, but I will tell it not to quake! So, everyone, do not be afraid of this earthquake!" I said, "As long as I remain in San Francisco, then there won't be a great earthquake. A minor or trivial disaster doesn't’t count." Hence, there hasn't been a great earthquake. Those who believed and had faith did not run away; those who did not believe ran away. From then on, every year, there were predictions of an impending earthquake. Every year, I had to tell people, there won't be an earthquake. It's been more than ten years since then - 1968, 1978, and now we are in 1980, so more than 10 years now! But don't say that my words are effectual; no, they aren't effectual, it just so happened that there was a coincidence. All in all, there wasn't a great earthquake; minor and small ones don't count.

I hope that all of you will seal your mouths tightly and not share what I have told you with outsiders. If you happen to broadcast it, then the City of Ten Thousand Buddhas will explode with people because people from all parts of the world will want to come to this peaceful, safe Way-place.

We at the City of Ten Thousand Buddhas should earnestly and solidly apply effort in our cultivation. It does not matter whether people make offerings to us or not. We should genuinely cultivate!

The first one is, "Freezing to death, we do not scheme." Even if we were to freeze to death, we will not go around looking for people to make donations to us, or make offerings to us.

The second one is, "Starving to death, we do not beg." Buddhist monastics traditionally seek alms outside, but Buddhism is just starting to flourish in this country so we must have spirit and backbone. To be a Buddhist is to starve to death rather than beg from others. We must not show off our cultivation, or advertise how we cultivate and apply effort, or tell others to donate and make offerings to ourselves. If there is nothing to eat, we will, "Freeze to death standing up to the wind and starve to death walking upright." If we have not eaten for days, we do not ask for others's pity!

The third is, "Dying of poverty, we ask for nothing." The poorer we monastics are, the better. Like the term "poor sanghan," monastics should all be poor. If you are not poor, then it is bad! As soon as monastics have money they will make trouble; if they are not buying good things to eat then they are buying good clothes to wear. This is giving rise to a kind of arrogance. So even if we are dying of poverty, we ask for nothing.

"We rectify our lives as the Sangha's work." We are revolutionizing Buddhism, to eliminate the false, unreal, superstitious conduct in the Sangha! Eliminate the drawing of lots, fortune telling, the burning of paper money, paper planes, steamboats, trains! These are all superstitions!

Buddhism in the West Resembles the Light of Dawn

The Six Guiding Principles Are Our Standard

If you want to help Buddhism, you have to actually propagate the Buddhadharma, set a good example for others, maintain good deportment, keep the five precepts, and save living beings by means of the four limitless minds of kindness, compassion, joy, and giving. Our conduct should be based upon the Six Guiding Principles of not fighting, not being greedy, not seeking, not being selfish, not pursuing personal gain, and not lying. If we practice the Buddhadharma according to these guidelines, then the Proper Dharma will be present wherever we are. The decline of the Dharma will not manifest.

If you can understand the true and actual meaning of the Six Great Principles, then you will not have come to the City of Ten Thousand Buddhas in vain. The Six Great Principles are six bright paths. They are also known as six kinds of wisdom, six kinds of demon-quelling pestles, and six kinds of monster-spotting mirrors. Ever since I was little, I have followed these six bright paths of not fighting, not being greedy, not seeking, not being selfish, not pursuing personal gain, and not lying. No matter what it is, if others want it, then I don’t want it. If others don't want it, then I pick it up. That's the way I am. Can all of you act the same way? If so, then I congratulate you for being good Buddhists. If you can remember these six great guidelines, you can become a Buddha.

Appendix 1: A Recollection by Dharma Master Heng Sure

For those of us who left the home-life and practiced under his guidance, the Master purified our minds of defilement. The Master gave to the world the six guiding principles--no fighting, no greed, no seeking, no selfishness, no pursuit of personal gain, and no lying. These principles are the Mind Ground dharma-door; they can make our minds pure and bright. Such is the perfection of giving practiced by Bodhisattvas. The Master gave to each of us the dharma-door we like to practice, enabling us to plant blessings, merit, and virtue. All we have to do is accept this gift with open arms.

Once, taking advantage of a spare moment, I requested instruction from the Master. The Master said in surprise, "You are seeking instruction too? Don't seek outside, not even the slightest bit. When you can finally stop seeking, you'll be liberated. 'When you reach the place of no seeking, there are no worries.'That's  enough!" Then he smiled and added, "I have come to this country, or you could say to this world, hoping that someone will bring forth a great Bodhi resolve. When that happens, I will have achieved my aim." On the day that each of you brings forth a great Bodhi resolve, you will have fulfilled the Master's aim in giving from his heart.

In 1989, many people in Taiwan were speculating in the stock market and playing the lottery. When the Venerable Master stepped off the plane after arriving in Taiwan to hold a Great Compassion Guanyin Dharma Session for Protecting the Nation and Quelling Disasters, he said, "I prepared to starve to death in Taiwan. I wish to dedicate all my blessings to the people of Taiwan and to take all their sufferings upon myself." The Master never spoke in vain. I will never forget what I saw and heard as a volunteer at the front desk during the Dharma Session.

The Master had vowed, "As long as I am in San Francisco, I will not allow San Francisco to have an earthquake." When the great earthquake occurred in San Francisco (while he was in Taiwan), many worried American disciples sent telegrams asking the Master for help. The Master immediately flew back to the United States. But then a great typhoon hit Taiwan, and the disciples in Taiwan beseeched the Master to quickly return. Only two or three days later, the Master flew back to Taiwan to continue hosting the Dharma session to its end. During that month in Taiwan, the Master only drank water and didn't ingest so much as a single grain of rice. Upon witnessing the Master's spirit of forgetting himself in order to deliver beings from suffering, of "saving all with great compassion, sparing neither blood nor sweat, and never pausing to rest," many brought forth the Bodhi resolve.

When the Master returned to Taiwan for the last time in 1993, he said to everyone at the Dharma Realm Buddhist Books Distribution Society, "All my life, my credo has been: 'Freezing, I will not scheme. Starving, I will not beg. Dying of poverty, I will ask for nothing.' However, today I want to ask for a great donation from all of you. Please give me all your ignorance, afflictions, and tempers, no matter how dearly you cherish them!" No one wants ignorance, afflictions, or a temper, but the Master dared to ask for them.

Although the Master is no longer physically with us, he has given us an inexhaustible treasury of Dharma. Each sentence of the Master's teaching, if truly practiced, yields infinite benefits. Many people have asked, "Who received the Master's Dharma transmission?" Whoever truly practices the Six Guiding Principles of the City of Ten Thousand Buddhas (no fighting, no greed, no seeking, no selfishness, no pursuing of personal gain, and no lying) has received the Master's Dharma transmission. 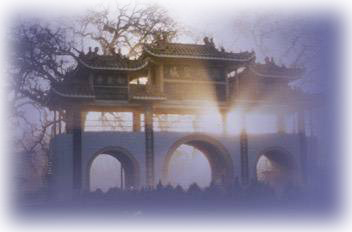