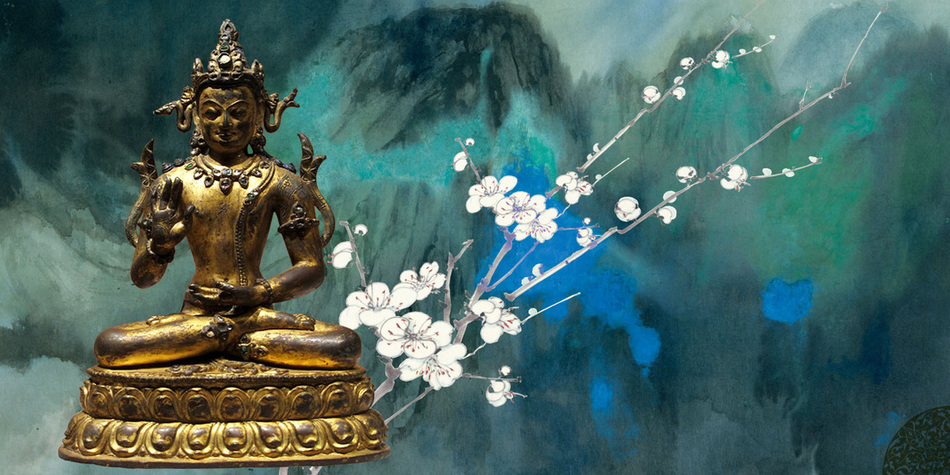 Among the Buddhas of the Five Directions, Non-empty Accomplishment Buddha(Sanskrit: अमोघसिद्धि , Amogha-siddhi), is the host of the north and represents the wisdom of accomplishment. He transform the affliction of jealousy and turns the first five consciousnesses into the wisdom that allows one to accomplish any task. He has a green-colored body and often sits on eight great golden-winged peng birds with his hands in the fearless mudra; he can overcome evil dragons and poisonous snakes. In the Shurangama Mantra, Accomplishment Buddha is the host of the Karma Division, which encompasses the mantras of all ghosts and spirits. We can use the dharma of quelling disasters to get rid of disasters, but we should always remember that repenting of karmic obstacles is the first step in quelling disasters.

A canopy of incense pervades the entire great void.
Everywhere permeating the Dharma-nature of all sentient beings.
Superior strength enables us to hold the pure moral precepts.
The host of the Northern Karma Division is fair and just.

This phrase of the mantra is for line number 373 which is in the fourth section of the Shurangama Mantra.  Every phrase has its own function in this Shurangama Mantra.  Every phrase is the Buddha’s mind-seal Dharma-door.  This Shurangama Mantra thoroughly pervades heaven and earth.  Whether we recite one word, one phrase, one section, or the entire mantra, it will make the heavens tremble and the earth reverberate.  So it is said to startle heaven and earth, make the ghosts and spirits weep, send the goblins and demons running far away, and cause the li mei ghosts to hide away.

At the City of Ten Thousand Buddhas one need not say anything else.  We have a Dharma-assembly in which we lecture the sutras everyday.  We explain the Shurangama Mantra, the Avatamsaka Sutra, and the Lives of Patriarchs.  Not a single moment of time is wasted.  During our lives we should do all these myriad activities to propagate the Dharma.

Although I taught the entire Flower Adornment Sutra, it was also just speaking one ten thousandth of the meanings.  I did not explain it in detail.  Not only did I not give a detailed explanation of the Flower Adornment Sutra, it was the same when I lectured the Dharma Flower Sutra, the Shurangama Sutra, the Amitabha Sutra, the Vajra Sutra, the Sixth Patriarch Sutra, the Earth Store Sutra, and the Sutra in Forty-two Sections.  I spoke in general and did not go into detail.  I did not completely explain the principles of the sutra.  Why did I explain it at all?  My intention was that although I cannot speak perfectly, in the near future, you who have great roots of goodness and vast wisdom can explain it more extensively, completely, and deeply.  That is why my lectures on the sutras are called simple explanations.  I only offered general summations.

Now Guo Zhen will continue the explanation of the Flower Adornment Sutra, starting from the beginning again.  This will be a great opportunity for all of you.  You did not pay close attention before, so now you have an opportunity to listen and pay attention this time.  You should all know that when Guo Zhen did his “three steps, one bow” pilgrimage from Los Angeles, he passed through all kinds of obstacles such as rain, wind, and the hot sun.  Many such obstacles were encountered and were vanquished.  He is now staying in the City of Ten Thousand Buddhas and continues to bow once every three steps.  He is not afraid of anyone’s ridicule.  He, himself, does not talk, laugh, or cry.  That is not easy for a young adult to maintain.

He does not read newspapers, receive or make telephone calls, or listen to the radio.  In this day and age, for a young adult to be cultivating the Buddha’s path in this way is rare.  There is no certainty that another such person could be found in the entire world.  Now, he has generously agreed to give formal lectures on the Flower Adornment Sutra.  He speaks well in Mandarin and excellently in English so you should not miss this chance.  In the City of Ten Thousand Buddhas, we are imbued with Dharma all the time.  You could say that there is no other place like this in the world.  It is not that we are being self-satisfied, boastful, or praising ourselves.  Rather we are able to do these things because we really wish to propagate the Buddhadharma and work hard in our cultivation of the path.  Therefore, all the Buddhas and Bodhisattvas will not ignore our painful efforts.  With their ability to create heaven and establish the earth, they will make the City of Ten Thousand Buddhas become like the Land of Ultimate Bliss.  Then those of us who come here will be able to work hard at our cultivation of the path.  If we do not recognize this and do not cultivate well, we will miss this opportunity.  That would be a real pity.

These syllables of mantra mean a canopy of incense.  When we recite these syllables, they pervade the entire Dharma Realm and carry with them a pleasant fragrance.  A canopy of incense pervades the entire great void.  This great void not only includes the human realm, but also the heavens, the hells, and the hungry ghosts.  They will all be saved and protected by this Dharma that is everywhere permeating the Dharma-nature of all sentient beings.  This canopy of incense does not just reach one or two people.  It permeates everywhere in the Dharma Realm.  Thus, it is described as everywhere permeating the Dharma-nature of all sentient beings.