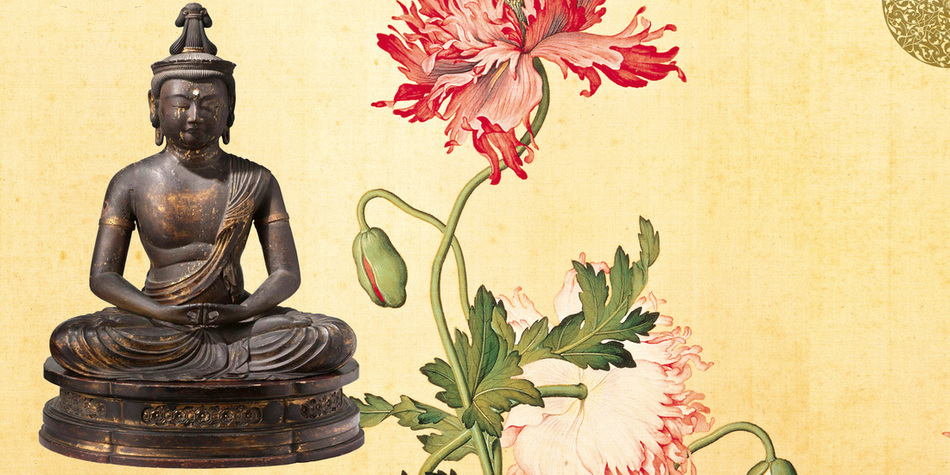 Amita Buddha（Sanskrit：अमिताभ，Amitābha），Amita is translated as “infinite light” or “infinite life.” The Secret School honors him as the leader of the Western Lotus Division among the Buddhas of the Five Directions. He is associated with the Wonderful Contemplative Wisdom. This Buddha's body is red. His hands display Amitabha’s samadhi mudra, and he sits on a dais among the Eight Great Peacocks, each of which wears a red lotuses on its head.  He can turn the sixth consciousness into the Wonderful Contemplative Wisdom, which can neutralize the poison of doubt, among the Five Poisons. Amita Buddha is also known as Infinite Life Buddha, Infinite Purity Buddha, Sweet Dew King Buddha or Infinite Light Buddha. He belongs to the Lotus Division in the Shurangama Matra, the mantra of all Bodhisattvas. This part of the mantra is based on the method of gathering in, which draws in beings of different calibers.

The Amita Sutra was translated by Dharma Master Kumarajiva and spoken by Shakyamuni Buddha without having been requested. All other sutras were spoken on request except this. How come? It was because the principles of this sutra are unfathomably wondrous such that the Sound-hearers lacked the wisdom for it and no Bodhisattvas understood. Hence, no one was able to request the teaching of the Pure Land. However, Shakyamuni Buddha observed that the conditions were right so he spoke this sutra.

In the West is Amitabha on a jeweled lotus flower,
Waiting for living beings to quickly return home.
Sing lemindedly hold his name and never, ever retreat.
Myriads of millions of countries are then reached within a kshana.

Singlemindedly hold his name and never, ever retreat.  So how do you go there?  There is nothing else you have to do, just sing lemindedly recite “Namo Amitabha Buddha.”  If you turn your mind to one and hold his name and never retreat, never turn back, then it will be all right.  All you have to do is to recite the name of the Buddha, or you can recite the name of Kuan Yin Bodhisattva.

Myriads of millions of countries are then reached within a kshana.  A kshana is an extremely brief interval of time.  So in that short space of time you pass through millions of Buddhalands.  You can do it in this very instant!  You can go to millions and millions of Buddhalands in the space of an instant.  So everybody who wants to get born in the land of Ultimate Bliss should recite “Namo Amitabha Buddha.”  If you do it sincerely, then you surely can go very quickly to the Land of Ultimate Bliss.