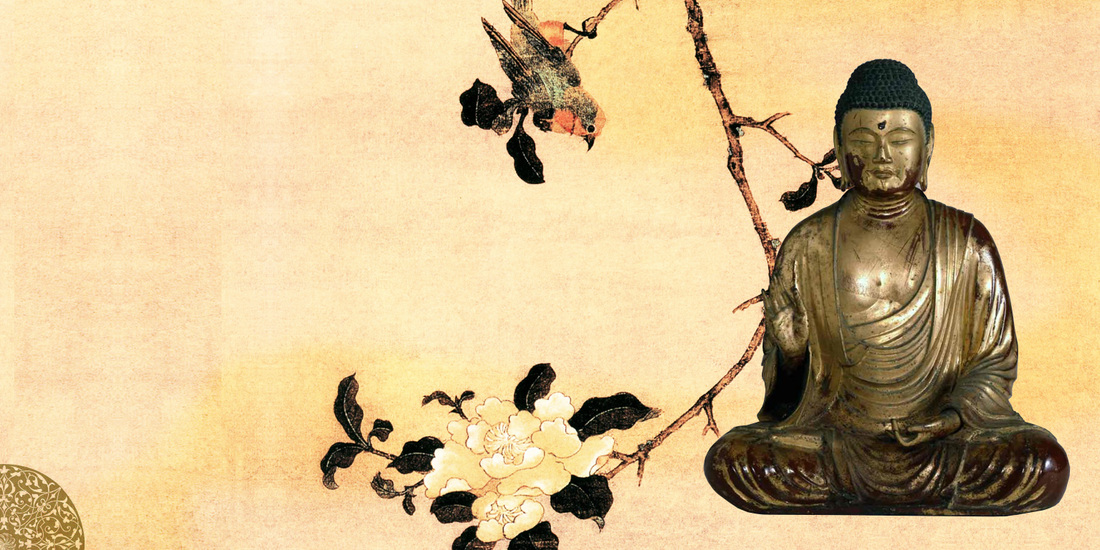 Akshobhya Buddha（Sanskrit：भैषज्यगुरु，Bhaiṣajyaguru），Medicine Master Buddha (Sanskrit: Bhaiṣajyaguru), or Medicine Master Lapis Lazuli Light Tathagata, is the teaching host of the Eastern Pure Lapis Lazuli World. The Flower Adornment (Avatamsaka) Sutra says that a single thought of anger opens the door to millions of obstacles. One can fend off malicious intentions only in the absence of anger. Akshobhya Buddha had made a vow prior to his Buddhahood that he would not be angry under any circumstances. That is why he accomplished his pure land and has never retreated from the vow since. Akshobhya Buddha has a blue body and sits on a dais among the Eight Great Elephant King thrones in the east. He can eradicate the poison of anger and turn the eighth consciousness into the Great Mirror Wisdom. Among the five divisons of Shurangama Mantra, the Vajra Division is in the east. The Vajra King Mantra is a subduing method. Nevertheless, first and foremost, a cultivator should subdue his own afflictions at present, instead of hurrying to subdue others.

Akshobhya Buddha is the host of the Vajra Division.
When his great yaksha generals each go out on patrol,
The heavenly demons and their retinues flee,
And the ox ghosts and horse spirits stampede.

All that has marks is empty and false.

To see all marks as no marks is to see the Thus Come One.


If we recite Medicine Master Buddha’s name only to destroy our own calamities and lengthen our lives, that is both selfish and greedy.  Don’t you agree?  So, for whom do we destroy calamities and lengthen life?  It’s not for the Buddha, and it’s not for ourselves.  We aren’t in such a critical condition that demands reciting Medicine Buddha’s name.  We aren’t going to die immediately if we don’t recite it, and there aren’t any immediate disasters threatening us, either.  It would be very superstitious to approach it in that fashion.  We should recite Medicine Master Buddha’s name and transfer the merit to all those living beings who are involved in disasters or who are on the point of death.  This is the most magnanimous use of the recitation, not a narrow use of the recitation.  When we recite the Buddha’s name, or do any other kind of cultivation, we should understand the theories behind it clearly.  We shouldn’t just follow others blindly and do whatever people tell us to do.  If people tell us anything, we shouldn’t just follow along.  People who study the Buddha-dharma should have genuine wisdom.  Genuine wisdom means we don’t just pick at other people’s weakness.  It means understanding the doctrines, investigating them until you are clear about them.  Thus, we recite the name of Medicine Master Buddha Who Destroys Calamities and Lengthens Life on behalf of all those living beings who have been struck by disasters or who are near death.  It’s all a part of benefitting living beings and practicing the Bodhisattva Path.

JYU LA YE means retinue.  The retinue of Akshobhya Buddha is called the Vajra Assembly.  They are the eighty-four thousand vajra-fisted Bodhisattvas who protect practitioners of the Dharma.  The Five Divisions have been discussed before.  The Buddha; the Western Lotus Devision is headed by Amitabha.  In the east is the Vajra Division, headed by Akshobhya Buddha.  Since he is in charge of the Vajra Assembly, he has twelve great Yaksha generals.

When his twelve great yaksha generals to out on patrol / they travel all around, keeping an eye on things, seeing which heavenly demons or externalists are not following the rules.  They are like the police.  Our police are visible, but these police are invisible!  Invisible they may be, but they are there nonetheless.  You shouldn’t doubt their existence.  They’re there all right!