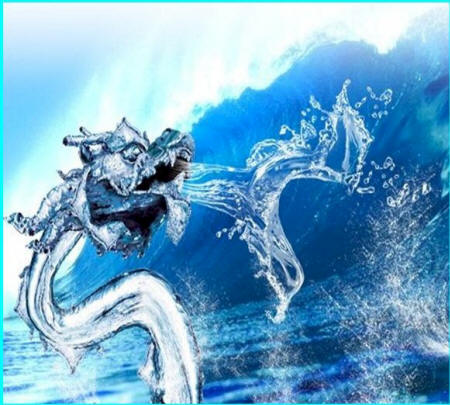 For our earth, the summer of 2021 is a season of simultaneous disasters of water and fire. Across the world there have been multiple places suffering from wide-spreading wildfires or calamitous floods. Recently, Bhikshuni Heng Chih, in her online classes sponsored by Dharma Realm Buddhist University Extension Program, has been introducing the “Seeking Rain from the Dragon Kings Mantra,” which she first learned from Venerable Master Hsuan Hua when he taught it to his disciples back in the ‘70’s, when California had been suffering a two-year drought.

Venerable Master Hsuan Hua arrived in San Francisco from Hong Kong in 1962 and established Gold Mountain Monastery in San Francisco a few years later. In 1969, his first group of American disciples became ordained Buddhist monks and nuns. Bhikshuni Heng Chih was one of those first five. Later, in 1976, he founded the City of Ten Thousand Buddhas (cttbusa.org), which became the main monastic complex for his Mahayana-based disciples, as well as headquarters of the Dharma Realm Buddhist Association (drba.org), and the campus of Dharma Realm Buddhist University (drbu.edu). Maser Hsuan Hua passed away in 1995.

Dharma Master Heng Chih currently is the chair of the Board of Trustees for Dharma Realm Buddhist University and is also an Emerita Professor at DRBU. She has been an ordained nun in good standing for 52 years. Over the past few weeks, during her Dharma talks and online classes, she has taught about the “Seeking Rain from the Dragon Kings Mantra,” which can be found in the Chan Handbook for Daily Use [禪門日誦chán mén rì sòng], pointing out that this mantra should be useful in appealing to the dragon kings to regulate the amount of rainfall. Thus, the chanting of it has the potential to bring global benefit to humankind at this time.

The effectiveness of this mantra was evident in the 1970s, when California also had a terrible drought. Rain was desperately needed. There is an audio record of Venerable Master Hsuan Hua telling the full story of a Dharma event to seek rain that was held in San Francisco during that time, hosted by the Gold Mountain Monastery. Around then, the CTTB property had been recently purchased, but most disciples were still staying at the Gold Mountain Monastery because the City of Ten Thousand Buddhas was still being prepared to house residents.

On February 19, 1977, after two consecutive years of drought, Dharma Masters and lay disciples at Gold Mountain Monastery set up a platform at the Golden Gate Park, San Francisco, to seek rain. The Gold Mountain [Monastery] community of monks, nuns, and laypeople chanted this “Seeking Rain from the Dragon Kings Mantra.” A large number of passersby noticed this unique and meaningful event and came to join the chanting.  Also, “A Plea for What is Needed Now” was intermittently addressed to the dragon kings.

This rain-seeking Buddhist event was likely unprecedented in the history of the United States and no doubt was scrutinized by people unfamiliar with Buddhism as being superstitious and impossible. The event lasted for an entire day until 7 p.m.

It was still sunny without any clouds until the next noon. Then all of a sudden, dark clouds gathered, along with thunder and lightning. Suddenly, a heavy rain poured over the entire area. It was astounding!  This sudden rainfall puzzled the weather station staff, but Venerable Master Hsuan Hua explained to us that this is a state of responsive interaction with the Way. The minds of those seeking rain had been intensely sincere - so sincere that the dragon kings were moved to exert their compassion and sent the rain when it was actually not due, to save living beings. The drought thus ended. The event created a brief media sensation in San Francisco. Journalists and reporters sought interviews with the monastics and other participants in the rain-seeking event.  Some called it a miracle!

Since Dharma Master Heng Chih was a participant in that 1977 rain-seeking event, she remembered it well.  She also noted how prolific natural disasters across the world are these days, including large-scale wildfires and severe droughts, as well as disastrous flash floods that are the worst in the last hundred years. She suggested that these calamities are the consequences of us humans making mistakes that harm the environment and of us not being good stewards of the earth. Dharma Master Chih said, “Such situations of too much or too little rain are all related to us human beings living on this earth, or as Buddhism calls it, this saha world. Buddhism recognizes that dragons control rainfall, so we are hoping that the dragons can help us to rectify the consequences of our own mistakes so that we can get back to the Middle Way and reach a balance. If there is too much rain, we hope the dragons can help stop it. If there is too little, we hope the dragons can bring us some.”

When the Venerable Master taught people about the “Seeking Rain from the Dragon Kings Mantra”, he instructed them to add “A Plea for What is Needed Now” that sought for rain. But nowadays what we are facing in the world is extreme climate shifts across the globe, where rains and droughts are disrupting the balance of nature. Given that, Dharma Master Heng Chih revised the plea accordingly. When the “Seeking Rain from the Dragon Kings Mantra” is chanted, this revised plea can accompany it.

Seeking Rain from the Dragon Kings Mantra (in Hanyu Pinyin):

The recitation taught by the Venerable Master Hsuan Hua, which includes the paragraph of plea, is as follows:

“Based on the spiritual power of the Buddhas, may the great dragon kings and others quickly come here, to Jambudvipa and let fall an abundant rain.”

(Once the plea is said, finish the mantra)

The revised version by Dharma Master Heng Chih is as follows:

“Buddhas, Bodhisattvas, and powerful Dragon Kings, please regard us with compassion. We human beings in our selfishness, have begun to destroy our Earth. Destabilizing climate changes increase. We now beseech you spiritual dragons, to save this world of ours, so that it can become strong again and continue to sustain life. May the weather be seasonable. Let what is excessive diminish; let what is insufficient increase. May deluges slacken and floods abate. May parched areas receive auspicious, needed rain. May Earth regain balance and may people find the Middle Way.”

(Once the revised plea is said, finish the mantra)

Throughout history, there have been quite a few examples of prominent Buddhist monks pleading for rain or snow for living beings during a drought. In one of Dharma Master Heng Chih’s recent talks, she related the details of a 1900 event at Wo-Long Monastery in Xi’an, China, when Venerable Master Hsu Yun led over a thousand Sangha members to plea for snow for seven days. Snow did indeed begin falling, and once it did, all the Sangha members left, except for Master Hsu Yun himself, who continued with the plea. After another seven days, the entire area was covered by ice, and drought was completely gone when the next spring came. Learning about the success of the1900 event and the 1977 event gives us great encouragement to recite the “Seeking Rain from the Dragon Kings Mantra,” along with the revised “A Plea for What is Needed Now,” as much as possible. Anyone who wishes is welcome to join in this recitation, the aim of which is to reduce the disasters in this world and relieve the pain that living beings are experiencing.