- The first time the Venerable Master [Hsuan Hua] personally visited Calgary, as the airplane flew over the Rocky Mountain Ranges, the Venerable Master told his disciples next to him, "Manjushri Bodhisattva has come to Canada. The snowy mountain below is Manjushri Bodhisattva Bodhimandala. You should make pilgrimages to this mountain in the future." The snowy mountain that the Venerable Master mentioned is Castle Mountain. Castle Mountain is located within Banff National Park in the Canadian Rockies, approximately halfway between Banff and Lake Louise. The mountain was named in 1858 by James Hector for its castle-like or fortress-like appearance. The Venerable Master told his disciples to purchase this piece of land--Golden, and find an appropriate location for building a large Buddhist monastery in the future. He also predicted, the Buddhadharma will flourish here in the future.

(Excerpt from Layer upon Layer, Peak after Peak http://www.drbachinese.org/vbs/publish/466/vbs466p031.pdf )

- This [Sutra] Treasury of the Mahayana was compiled by Manjushri Bodhisattva and the Venerable Ananda in the Great Iron Ring Mountains outside Mount Sumeru. They compiled the texts of the Sutras, and edited and polished them. This work could not have been done by one person alone. At that time, there were a great many Bodhisattvas and Arhats— not just Manjushri Bodhisattva and the Venerable Ananda—helping to compile the Sutra Treasury.  http://www.drbachinese.org/vbs/publish/433/vbs433p022.pdf 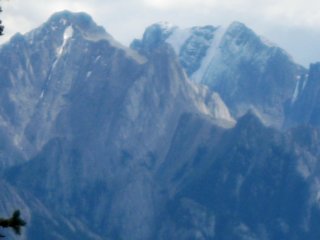